This tutorial will teach you fundamentals object oriented programming concepts from the perspective of the Objective-C programming language.

Object Oriented Programming (OOP) is a programming methodology used for creating objects that interact with each other in an iOS application. Object-Oriented Programming in really boils down to four fundamental units: classe, object, message sending, inheritance. Objective-C language support all of them.

You write object-C code to create a class in a class file. You then instantiate one or more objects from the class when needed. Objective-C class code goes in  two files: an interface (header) file and an implementation file, as shown below.

That’s pretty much all the background knowledge you need to know about Objective-C’s class. Now, you are probably wondering how do you actually create a class, instantiate an object of the class, and use the object? Well you will learn how in due time.

You already know that an object is an instance of a class. One thing you should know about objects is that they accept and respond to messages sent to them.

One such message you can send to an instance of the UITableView control, is:
removeObjectAtIndex:

One way to read above message is like this:

send removeObjectAtIndex: to the books object.

How the book object actually removes an object at the specified row is up to the table object control implementation. The removeObjectAtIndex: message has only one argument. Figure 1 shows how the necessary Objective-C code is executed when a message is sent to an object.

Step 1: The object that is the target of the message (table object) is consulted to see what its class is.
Step 2: The class looks through its code and find out where the removeObjectAtIndex: method is.
Step 3: Once it’s found, the method’s code is executed, which deletes the table’s row. The indexPath.row argument determines which row to delete.

Don’t forget this: The user is the one who initiates the message by tapping the red Delete button in the table’s row. That’s pretty much how Objective-C’s message sending works in an iOS application.

Inheritance is nothing more than the process of deriving a new class (subclass) from an existing class (superclass). The subclass inherits all properties and methods of its super class. All Objective-C classes inheritance stems from the NSObject superclass. For example, the UIViewController class is a subclass of the UIResponder class. The UIResponder class in turn is a subclass of the NSObject superclass. 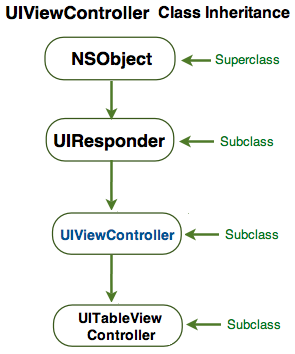