Sub Tools of The SDK

The Apple LLVM compiler builds your app when you click the Run button of Xcode’s Toolbar process C and Objective code you enter in a class file.

As you write code, the compiler helps you out by

Three programming languages are embedded in the SDK, but we only use two of them to write code for an iOS application to make its user interfaces functional. how the Apple LLVM compiler works

Here is how steps in above image works.

By the way, the Apple LLVM compiler and linker is built right into Xcode.

Cocoa Touch is a collection of frameworks. When you create a new project, Xcode adds the Frameworks folder in the Xcode’s Navigator panel for you. If you expand it, you will see three frameworks listed there. In your day-to-day app development, you will use the UIKit and the Foundation frameworks often.

You’ve learned how to used some of them in the AppDemo application you created in the Create an ios App workshop. In future lessons, you will learn how to use more UI controls.

The Foundation Framework
This framework provides classes for creating objects which you use to store data the app will use. Here is partial list of classes you will find in the Foundation framework.

For example, the NSString class is used for instantiate a string object, which you use for storing a string of text or numbers. In upcoming workshops, I will show you how to use classes of the framework you will use in your day-to-day app development.

The assistant editor automate the process of doing the following, so you don’t have do them manually.

You can also use the Assistant Editor to load two different files side by side, so you can create IBOutlet and IBaction methods. By the way, Xcode automatically connect outlet properties and action methods you create in the interface file.

This is the editor you use 90% of the time to write Objective-C code in an interface and implementation file. 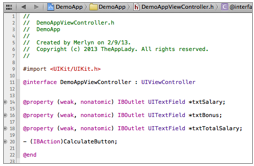 The Debugger is a window that’s automatically displayed at the bottom area of the Xcode’s Workspace. You can click the Debugger button, on Xcode’s Toolbar to show/hide it. It gives you the ability to stop your program mid-stream, examine the values of variables, and investigate the aftermath of errors that prevent your application from running in the iPhone/iPad Simulator.