Swift Workshop 29: How to Use The iOS 8 Split View Controller – Part 3 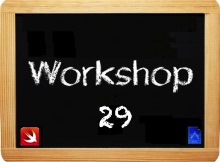 Welcome to part 3 of the How to Use The iOS 8 Split View Controller workshop. Here’s what you learned so far:

In part 1, you learned the default behavior of the split view controller. In part 2 , you learned how I configured the SVCDemo app I created for this workshop series. As of now, the app basically, perform these tasks:

Now, in part 3 of the workshop series, you will learn how to do the following:

As you already know, scene 1 is connected to the ContainerViewController.swift class file, and scene 2 is embedded in scene 1’s Container. Figure 3-1 below shows this. So, to override the split view controller’s trait collection, you have to add code in scene 1’s class file. I will show you the source code to add in the class file first; then, I explain how it works.

How The Code Works

To verify when the performTraitCollectionOverrideForSize() function’s if statement code block is executed, add this statement below the for statement’s closing } bracket.

Once you’ve done that, run the app in any one of the iPhone or iPad simulator’s. If the function’s if statement evaluates to true, you will see output similar to this one, in Xcode’s Debugger window:

The second property configured is the splitVC object’s preferredDisplayMode. As you can see on line 41 in Figure 3-2 above, the preferredDisplayMode property was set to the AllVisible value, which means that both the primary and the secondary view controllers will be visible at the same time.

The third and final property configured is the splitVC object’s preferredPrimaryColumnWidthFraction. As you can see on line 42 in figure 3-2 above, it was assign the fractional value 0.4; this number specifies the width of the primary view controller’s view. Increasing the fraction make the view wider; the opposite is true when you decrease the number.

Take The App For A Spin

Now that you know how the ContainerViewController.swift class file’s code work, you should test drive the application in the iPhone and iPad simulator’s to see result of the code. The first screen shot below shows what the split view controller’s primary view look like in portrait orientation, by default on the iPhone 6 simulator. The second screen shot shows what the split view controller’s views look like on the iPhone 6 simulator, when you click a row, then rotate the simulator to landscape orientation.