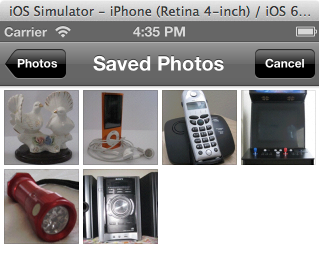 In this workshop you learn how to use an instance of the UIImagePickerController class to enable the user to select a photo from the system’s photo library, then display it in an imageView control. The photo library is located in the System’s Photos application. Also, the system is the iOS Simulator.

In addition to conforming the FirstViewController class to above mention classes, you will have to implement these delegate methods of the UIImagePickerController class.

didFinishPickingMediaWithInfo:
This delegate method launches the systems’ Photos or Camera application so the user can record a media or pick a media (video or photo). This method automatically return the user back to your application when he or she finish recording or picking a media.

You should add could in this method to set the imageView control’s image property, with the image the operator selected from the Photos app’s Photo Library.

Before getting started in implement this lesson’s objective, a basic understanding of the photo selection process will help you understand the code you’ll add in the FirstViewController’s ShowImageButtonTapped method and delegate methods of the UIImagePickerController class.

Here is a diagram of above steps. Think of the FirstViewController as the middle man between the ImagePicker and the ImageView control, as depicted in the diagram. 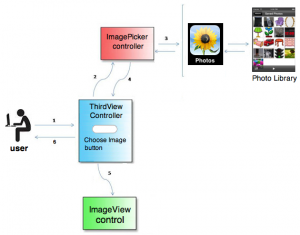 What you need to do now is add photos in the Photos application’s s Photo Library, so the operator of the ImageViewControl application can select which one he want to see in the imageView control. I want you to download and unzip this file. It contain 6 photos.

Open the folder in Finder and launch the iOS Simulator. Now, drag the first image from the imageviewcontroller-photos folded and drop it on the Safari icon-see image (a) below. Once the image is loading in Safari, hold down your left mouse button over the photo for a few seconds, release your mouse when you see a group of buttons-see image (b). Click the Save Image button.

Repeat above steps to add remaining photos that’s in the imageviewcontroller-photos folder on Safari. After adding the last photo, return to the simulator’s home screen (shift + command + h).

Now, click the Photos icon to launch it. The simulator window will look similar to what’s shown in image (c) below. Go ahead and click the Save Photos table row to see thumbnails of all six images you’ve added in the Photos app-see image (d). You can even click a thumbnail to view a larger version of the photo and delete it, it if you wish.

That’s pretty much how you add photos in the iOS Simulator’s Photos app.

Add Code in the FirstViewController.m File

The modern iPhone and iPad has a front facing and rear facing camera for taking pictures and recording videos. These pictures and videos are stored in the device’s Photos app.

In order to accessing the system’s Photos application in code, you’ll have add code in the showImageButtonTapped method as outlined in this pseudocode.

Notifications the FirstViewController class (the delegate) can receive are as follows:

What you did is conformed the FirstViewController class to the UIImagePickerControllerDelegate protocol, because the user will be interacting with Photos app’s photo library. Also, you conformed the FirstViewController class to the UINavigationControllerDelegate protocol, because the Photos app’s photo library will we be presented to the user modally.

Here are the delegate methods of the UIImagePickerController class to implement in the FirstViewController.m file.