In-App Purchase How To – Part 1

A reader of the “theapplady” blog asked me to create a tutorial that explain the steps to implement In-App Purchase in an iOS application’s tableView rows. I responded sure, but it will take a while to whip up a tutorial and present it to you. The reason for this is because the process of implementing In-App Purchase in an iOS application is a long and complicated process; especially for a newbie.

In this tutorial series I walk you through the entire process of implementing In-App Purchase in an iOS application I created just for this tutorial. There are 6 parts to the tutorial and you are reading part 1.

What is In-App Purchase?

In-App Purchase (IAP for short) is a feature you implement in an iOS or Mac application that enable the app user to unlock built-in app functionality or gain access to some form of premium content. Here are the most important things you should know about IAP.

IAP Does provide the you, the app developer the ability to

Now, there are five types of products an app user can purchase in an iOS/Mac application. The table below list, describe, and provide an example of the five product types.

Overview of The Tutorial’s iOS App

First of all you’ll use an Xcode project I created for this tutorial implement the ability for the user to perform five main tasks:

Assumptions Made About You

Before I show you how to implement the Non-Consumable IAP type in this tutorial’s application, I assume the following about you:

Here’s the link to download the Nifty-IAP project you will develop through out the tutorial. After unzipping the file, move the Nifty-IAP folder to the Interactive Swift Programing folder.

The Single View Application template was used to setup the project with options shown in Figure 1-3 (b). Further more, when Xcode prompted me to save the project, I ticked the “Create Git repository on” checkbox.

You should launch the project in Xcode and take it for a spin on your real device to see how it work. As of now, you’ll only see the ProductView. The first screenshot in Figure 1-4 below shows what the ProductView look on your iPhone device. The second screenshot show result of tapping the view’s “Restore” button.

There are two sets of pre In-App Purchase tasks you’ll do in this tutorial. As you can see in the cards below; you’ll do the first set in the Xcode project, you’ll do the second set in iTunes Connect web portal. 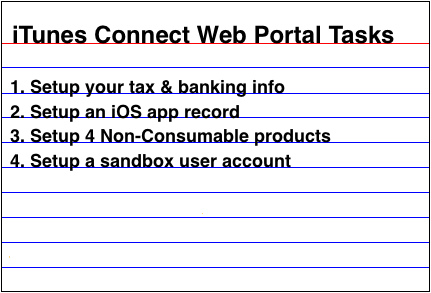 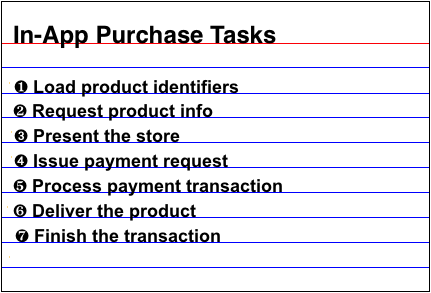 Once you completed above In-App Purchase tasks, you will perform Restore Purchases tasks shown on this card. 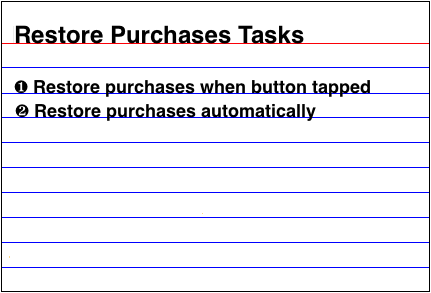 That’s pretty much it for today. Next week you get started in performing tasks in the first card shown above. In the mean time, keep above cards handy because you will use them to keep track your progress.