The UIScrollView Class: Before You Begin

Take a look at Figure 1, the Label control that says First Scene is outside the Scroll View control, so when you scroll it will stay put at the top of the view and controls place on the Scroll View will scroll beneath it. As you can see in Figure 1, a scroll bar appear on the right edge of the view when you click-drag the view to scroll it. 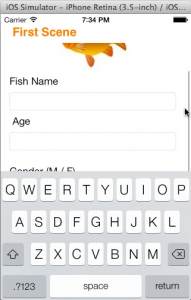 Making the Scroll View scroll is a two-step process. First you’ll have to declare and connect an IBOutlet property in your view controller’s header file for the scroll view control.

Say you placed several controls on a view only to realize that the view should be scrollable. Well, Interface Builder has built-in support for taking an existing view and wrapping it in a Scroll View. You do that by highlighting all the controls you’ve place on a view, then select Editor→Embed→Scroll View. Interface Builder will automatically create a new Scroll View and stick all the UI controls in the same location on the Scroll View.

In this workshop series you will learn how to implement above mentioned scroll view functions by first executing steps laid out below to create a new Xcode project.

Now that you’ve created the Xcode project you’ll use throughout this series, you are ready to learn how to implement the “Scrolling Content” function of the scroll view control.

In the first workshop of the UIScrollView Class series, you will learn how to make the Scroll View scroll it content vertically and horizontally.

Add Label On The View

The first thing I want you to do is click the Main.storyboard file, then replace the first scene’s controls with a Label control. In the Attribute Inspector pane, change the the control’s Color and Font attribute to what’s shown in Figure 3.

Add a Scroll View on The View

Add Controls on The Scroll View

Now that you’ve added a Scroll View control on the first scene, add controls shown in Figure 5 on the Scroll View.

Create an Outlet For The Scroll View Control

You have to add an image in the Image View control you placed on the Scroll View. You could use your own or this one.

To add above image in the Image View control you’ll have to do the following.

What you’ve done is set the Scroll View’s width (320) and height (700). Since we want the Scroll View to scroll vertically, we must set its height to a number greater than the View’s height, which is 568.

Take The App For a Spine

Now is a good time as any to take the app for a test drive to see the Scroll View in action. When the app is loaded in the simulator, click-drag the view’s background or the scroll bar up and down to scroll the view (see Figure 7). Next, click a Text Field and scroll the view to see controls hidden by the keyboard.

If you want the Scroll View to scroll horizontally, you’d have to set its width to a number greater than the View’s width, which is 320. For example; if you were to replace the statement you entered in the viewDidAppear method with this one, the Scroll View will scroll vertically and horizontally.

That’s it! Now you know how to make the Scroll View scroll its content vertically and horizontally.