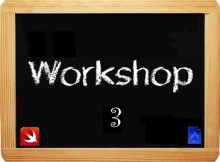 In this workshop I debrief you on the five main areas of Xcode 6 Integrated Development Editor (IDE for short) and the Swift Programming Language. Xcode 6 IDE is divided up in 5 main areas as shown in the image below. 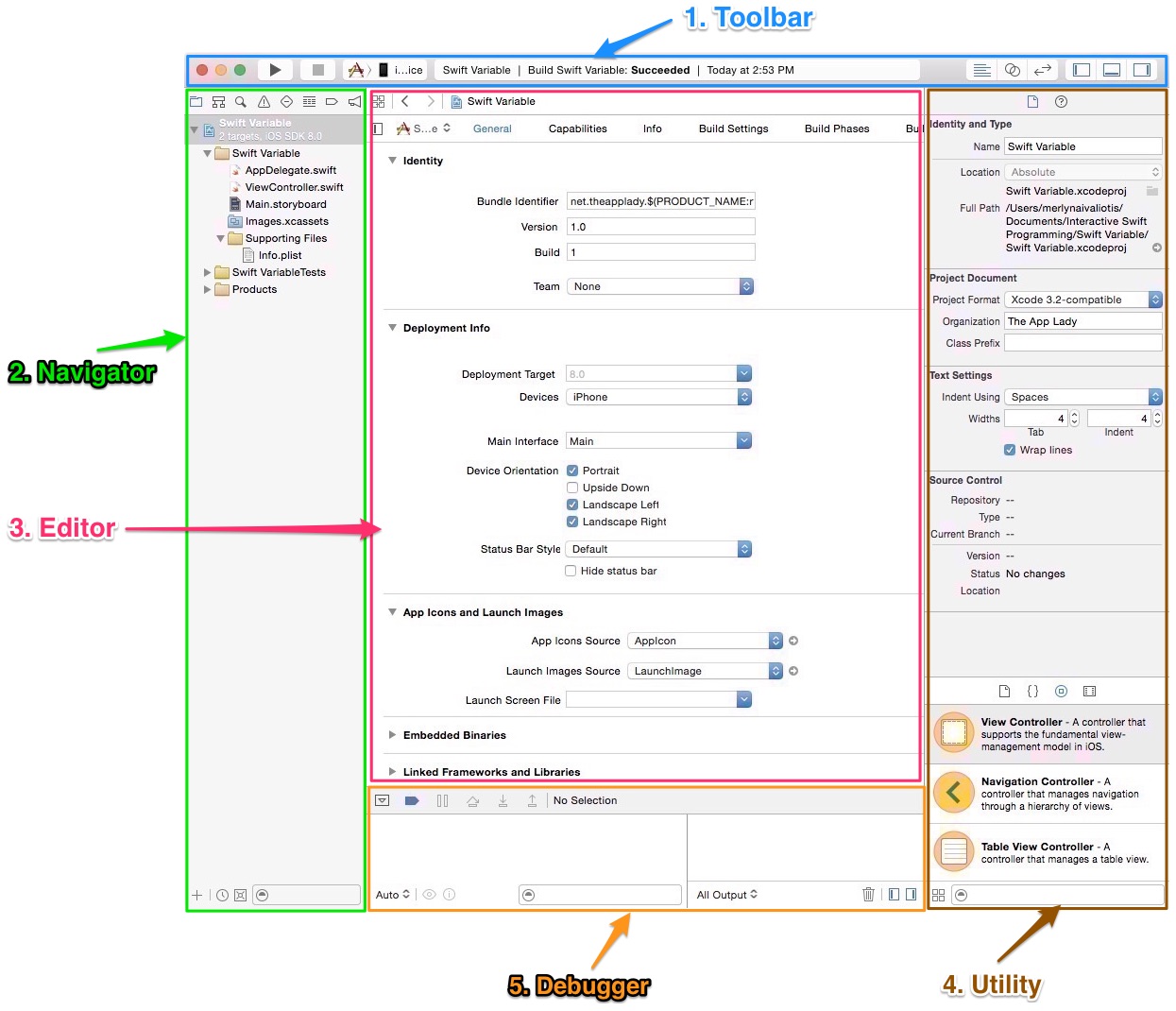 You should print this pdf file, Xcode Shortcuts B_W. It is a complete list of Xcode keyboard shortcuts on a single page. The pdf is courtesy of COCOA SAMURAI.

The Run button build and run the current project you are working on, in the selected scheme (iOS Simulator or a connected device).

The Stop button terminate the running project. Another way to terminate the project is to use the keyboard  (⌘ + .) shortcut keys.

You use Scheme pop-up menut menu to select where you want Xcode to run the project; in an iOS Simulator or on your connected device. The image below shows how to use the Active Scheme menu. First, you click the Active Scheme, which display a pop up menu. Second, you select an iOS Simulator. If your device is connected to your Mac its name will appear in the list. Third, you click the Run button, which look like a play button. Xcode will build and run your app in the iOS Simulator or your connected device. 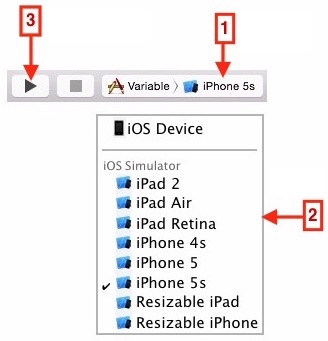 There are three buttons in the View selector and you use them to show or hide a view.

As you can see in  In Figure A above, there’s a header and implementation file for the AppDelegate class and the ViewController class. That’s because you selected Objective-C from the project options Language menu. In Figure B above, there’s no header class file, just one AppDelegate class file, and one implementation class file for adding your code. Fore example, you add code for connecting the view’s controls in the ViewController.swift class file. Also, notice that there’s no main.m file in the swift project’s Supporting Files folder, just an Info.plist file. 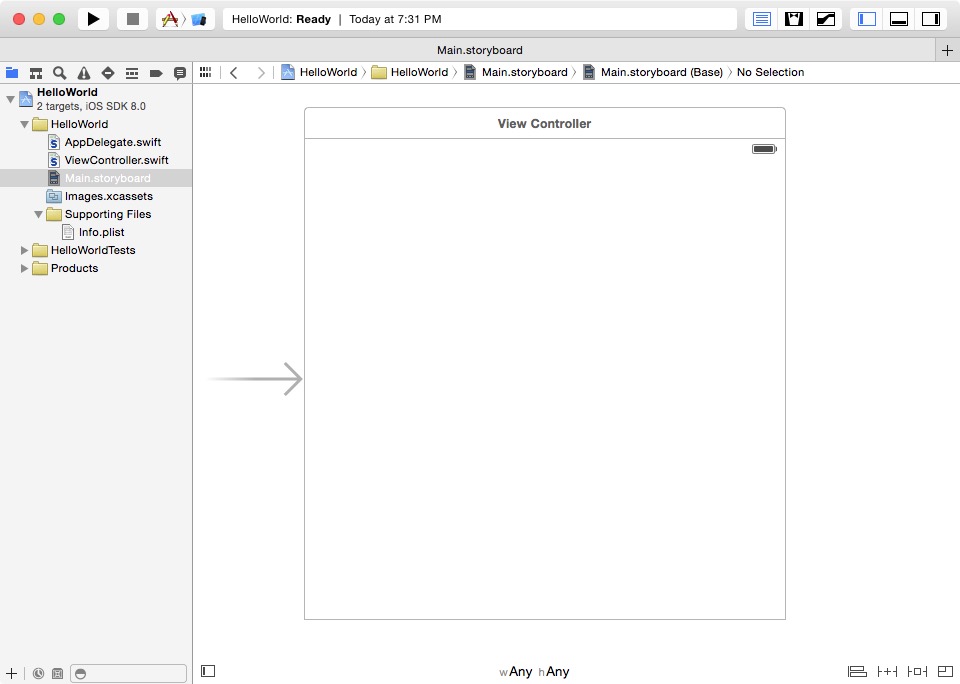 This mean you no longer need to create a storyboard for the iPhone device and the iPad device. Instead you use the size classes tool to select a width and hight combination for a generic device, that automatically adapt to various screen sizes and orientations. To see how the user interface layout appears on a specific device, you can preview it within Xcode. No need to run the project in the iOS Simulator project. In an upcoming lesson you will learn how to do that.

The Utility area have two panes and it look like this. It is located on the right side of the Editor area. 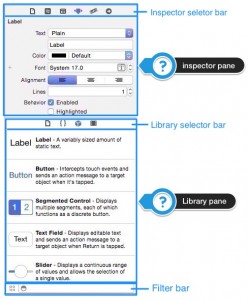 You use the Inspector pane to do things like setting an object’s attributes, changing its size, etc. The Library pane contain objects (also called controls) for designing a view’s user interface. You drag an object from the Library and drop it on the storyboard canvas. You use the Filter bar to quickly locate an object in the Library pane.

The Debugger is a window that’s displayed at the bottom area of Xcode’s Workspace. You can click the Debugger button, on the Toolbar’s View selector to show/hide it. The Debugger window gives you the ability to stop the running app mid-stream, examine the values of variables, and investigate the aftermath of errors that prevent your application from running in the iOS Simulator or your connected device.

Swift is Apple’s new programming language for coding iOS and OS X applications. In a class file, you can mix swift code with Objective-C and C code. In a playground file, you can test your Swift code before transferring it to your swift class file. Swift have a simpler syntax, which should make it much easier to learn. Swift automatically manages memory using Automatic Reference Counting. Swift still use the Cocoa Touch frameworks.

How the Swift import process work

Now, you can instantiate (create) objects from the framework’s classes using Swift syntax. This is possible because the compiler compiles the UIKit Framework’s Objective-C Header Files into Objective-C Modules. These modules are imported into your Swift class file as Swift APIs. Figure 1-1 below shows how the Swift import process works.

In a Swift class file, you use this Swift statement to create and initialize a table view object:

Now, the compiler import process does not convert the C Programming Language APIs to Swift APIs. However you can interact with C APIs within a Swift class file by using the native C syntax. By the way, Swift provide APIs for native C types and the table below list common ones you can use in your Swift class file.

For example; in C, you declare and initialize an integer variable like this:

Swift’s API for C’s int type is CInt and you use it in your Swift class file like this:

A few things you should know about Swift