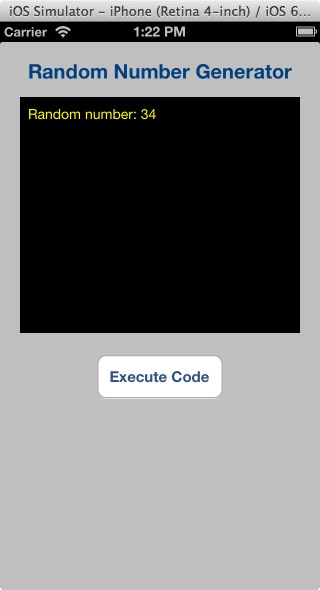 I’ve created an Xcode project you can use to practice code provide in this workshop, so go ahead and download and unzip it now. Drop the RandomNumberGenerator folder in the iOS Apps folder, then launch it in Xcode.

Random numbers are useful in many programming situations. In particular, games and quizzes need random numbers to make the applications interesting. You do not want to be presented with a deck of cards dealt in the same sequence in every game. Similarly, to have an effective quiz, you might not want to be asked questions in the same order every time you attempt the quiz.

The C library provides the function, rand(), for generating random numbers. The number returned by the function is an int. Here is an example of how to use the rand() function:
randomNumber = rand();

After this statement executes, the variable randomNumber will contain a random number. The numbers generated by this function aren’t truly random; they are pseudo random; that is, the function uses an algorithm that produces the same sequence of numbers each time the application runs on the same device. For example, suppose the following statements are executed.

These three numbers are displayed in the textView control and appear to be random, but each time you run the application, the same three values will be generated. 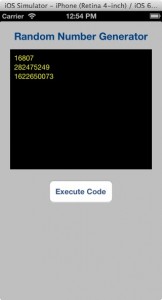 Generate and display random numbers in a specified range

Code in Listing 2 generate and display random numbers in no particular range. These numbers may be to large for practical use. For example, you might only need random numbers in the range 0 through 9 to use as a subscript to randomly choose an item stored in an array. There are many ways to generate numbers in a specified range. One of the simplest method is to use the modulus [%] operator and a value that is one more than the highest number you want. For example, if you wish to limit the range of a random number, us the following formula.
result = 1 + (rand() % maxRange);

The maxRange value is the upper limit of the range. For example, if you wish to generate a random number in the range of 1 through 100, use the following statements.
result = 1 + (rand() % maxRange);

This is how the statement works:

Listing 3 demonstrates what was said above and the image below shows result generated when you click the Execute Code button.