The focus of the “Using Core Data” workshop series is to show you how to use classes and methods of the Core Data framework in an iOS application to persist and restore its data. I assume you’ve already gone through these workshops: Fundamental Storyboarding and The tableView Workshop. Now, in this workshop you will learn fundamental Core Data terms.

Core Data Stack – It is the term used to collectively reference three main classes of the Core Data framework: NSManagedObjectContext, NSManagedObjectModel, and NSPersistenceStoreCoordinator. 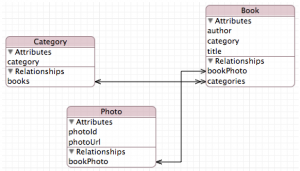 NSPersistenceStoreCoordinator – It is responsible for managing the context and coordinating access to the persistent store (SQLite database file).

This diagram shows components of the Core Data stack. You set it up in your iOS application’s AppDelegate class. 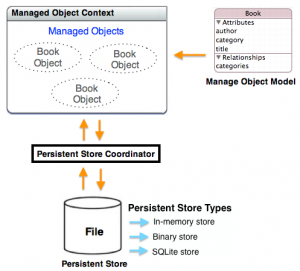 Persistent Store – The medium you use to store the application’s data is known as a persistent store in Core Data. As you can see in the image above, Core Data offer three types of Persistent Store.

Attributes – Columns in a table are known as Attributes in Core Data.

Predicate – It is a conditional expression that evaluate to true or false. In the Structured Query Language (SQL for short), a predicate is used in a statement containing a WHERE clause to restrict the row that is retrieved from the database’s table. The condition you provide after the WHERE clause filters the rows retrieved from the database’s table and gives you only those rows which you expected to see. The WHERE clause can be used in a sql SELECT, DELETE, or UPDATE statement.

In Core Data, a predicate is used in a fetch request to restrict the managed objects (rows) that’s retrieved from the persistent store (database file). The fetch request’s condition is provided as an argument in the predicate’s predicateWithFormat: method. Think of the predicateWithFormat: method as the WHERE clause of a sql SELECT statement. So, in a nutshell, a Core Data predicate is equivalent to a sql SELECT statement, which fetch managed objects (rows) from the persistent store (database) that satisfy a condition that is evaluated to true.