Now, before you begin, I assume you’ve downloaded and unzip this iOS project: ImageViewControl. You should drag-and-drop it in the iOS Apps directory, because you’ll be using it in this workshop. By the way, the UIImageView control tutorial is divided into 5 workshops and here’s what you will learn in each one.

Launch the ImageViewControl project in Xcode by double-clicking the file, ImageViewControl.xcodeproj, then take a look at the navigation panel and you will see I’ve added several images in the project. Other images you see in the panel were added by Xcode when I created the project.

One of the images you will find in the navigation panel is called flowers.jpg. Now, to display it in the first tab’s imageView control, you’d have to do following.

Click the FirstViewController.xib file to load it in IB, then click the imageView control to make it the active control.

Set The ImageView Control in Code

As you can see, only a single statement is required to set the ImageView control’s Image property. When you run the application, you will see output shown below in the iPhone simulator. 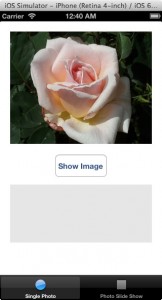