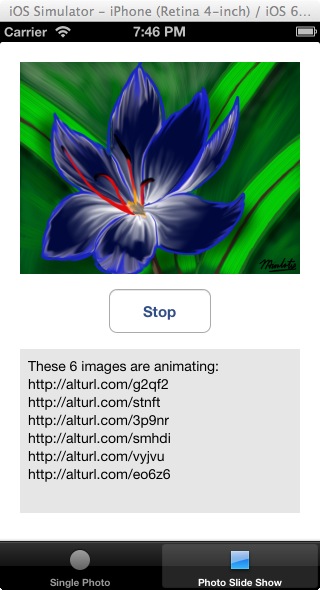 In workshop 4 of the UIImageView Control tutorial, you learned how to animate images in the imageView control. Wouldn’t it be nice to play an MP3 song in the background while the images are animating. Stop it only when the user tap the view’s Stop button control? Well, to make that happen you need to add the AVFoundation.framework in the ImageViewController project so you can use properties and methods of the AVAudioPlayer class.

An instance of the AVAudioPlayer class, called an audio player is used in your own class to play a short or long sound. It can loop a sound, play multiple sounds at the same time; it also allows control over a sound’s volume.

Here is a partial list of properties of the AVAudioPlayer class you can use.

currentTime
This property represent the playback point, in seconds, within the timeline of the sound associated with the audio player. By setting this property you can seek to a specific point in a sound file or implement audio fast-forward and rewind functions. This property returns the playback in seconds as an NSTimeInterval (a float) value.

volume
This property’s data type is a float and it is used to set the audio player’s sound volume, between 0.0 and 1.0.

Here is a partial list of methods of the AVAudioPlayer class you can use.

prepareToPlay:
This method prepares the audio player for playing a sound by preloading its buffers; thus, avoiding a delay between calling the play method and the sound starting. It takes no parameters and returns a boolean (YES or NO) value.

play:
This method plays a sound. It takes no parameters and returns the boolean value YES if it is able to play a sound; otherwise, it returns NO.

The AVAudioPlayer class has more features, such as adjusting the audio volume or playing multiple sound at a time at different volumes. You can learn about them in Apple’s AVAudioPlayer Class Reference.

Using the AVAudioPlayer class is just as easy as using any other Objective-C class; you have to do the following:

Once you’ve done above tasks, you can user properties and methods of the AVAudioPlayer class, without the compiler complaining. Now is a good time as ever to actually use the AVAudioPlayer class to perform this workshop’s objective, which is this: Play an MP3 song in background while the images are animating. Stop it only when the user tap the view’s Stop button control.

Step1: Add a sound file in the project

The first thing I want you to do is download this song:

After unzipping the file, drag-and-drop it in the ImageViewController project.

Step 2: Add the AVFoundation.framework in the project

To add the AVFoundation.framework in the project you must do instructions shown in these numbered speech bubbles.

As you can see in this image, the AVFoundation.framework have been added to the project.

Step 4: Declare & initialize an instance of the AVAudioPlayer class

Here is the code to declare an instance of the AVAudioPlayer class.

Step 5: Conform your class to the AVAudioPlayerDelegate protocol

Now, to use above method, add shaded code in the startButtonTapped method.

Run the application. Click the second tab, then the Start button. The app work as before, only this time the OnceUponATime.mp3 song plays in the background. Let the application run for a while. When the song finish playing, it will play repeatedly. Clicking view’s Stop button stop rotating images in the image control and stop playing the song.

That’s all there is to it. Now you know how to play a song in the background while images are rotating in the imageView control.