Workshop 22: The While and Do-While Loop 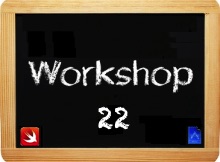 In this workshop you learn how to us the while and do-while loop to execute a block of code until a condition is met.

A while loop evaluates a condition. If it evaluates to true then code in the while block {} are executed. After the code have executed the condition is evaluated again and the loop continue until the condition evaluates to false. The while loop block must feature code that will affect the test condition in order to change the evaluation result to return false; otherwise, an infinite loop will be created.

If the test condition evaluates to false when it is first executed then code in the while block is never executed. A while loop is known as a post-test loop and it is done like this:

Code below demonstrate how to use a while loop. The counter variable is incremented on each iteration of the loop until it reaches 5 when the condition (counter < 6) is evaluated to false and the loop ends.

Above code will produce the following output in the playground’s Timeline.

Code shown in the image below demonstrate how to use the do-while loop. The image also shows result of the code in the iOS Simulator.