Workshop 28: How To Use The Size Classes Control And The Auto Layout Bar In Xcode 6 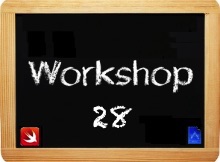 Gone are the days of creating two storyboards files in your iOS project. A storyboard can have one or more scenes and each one represent the app’s user interface or view. So one storyboard is needed for creating the app’s user interfaces and they are automatically displayed on iPhone and iPad devices. The key to making that automation work, is to use the two Interface Builder tools: the Size Classes Control and the Auto Layout bar.

In the first half of the workshop, I discuss both tools, and in the second half you learn how to use the Size Classes Control and the Auto Layout Bar in an iOS application. Before you begin, I assume the following:

1. You installed the latest beta version of Xcode. Currently it is Xcode 6.1 beta.

2. Created an iOS project called Workshop28 in the Documents/Interactive Swift Programming folder on your iMac.

3. You know how to use the Assistant Editor to preview the storyboard in the iPhone and iPad device.

In Xcode 6, you create a new iOS project by selecting a template and provide options for the project, as usual.

Xcode takes care of setting up the project files and folders and displaying them in the Project Navigator panel for you. One of the file Xcode create is a single storyboard file called Main.storyboard. When you click it, Xcode load it in Interface Builder. 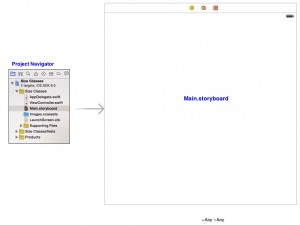 The size classes control is located at the bottom of the storyboard canvas and it look like this:

It shows a default size class. So wAny = width Any and hAny = height Any. This size class represents the size and orientation of a generic layout of a scene.

For example, the image below shows the generic size class, which produce a generic iOS device layout.

Apple recommends you select the generic size class and use the layout it produce, to design the application’s user interface. Take a look at images below, they show size classes you can select from the size classes tool and how they change the layout of the storyboard canvas. You can think of them as seven different layouts within a single storyboard file.

Changes made to views and constraints apply exclusively to the layout a size class produce. For example, say you selected the generic size class and added views on the layout it produce. Now, you want to add constraints only to the iPhone device, in portrait orientation. You’d have to do the following:

You will have to repeat step 5 and 6 until there are no more layout issues. In summary, the size classes control display the size classes tool, which you use to select a size class, and in turn it change the storyboard layout to an iPhone device, in Portrait orientation.

By the way, the iOS Simulator and asset catalogs fully support size classes. For example,when you launch the app you are developing in an iPhone simulator, the layout the size class produce automatically adapt to the appropriate iPhone size and orientation.

It is located at the bottom right corner of the storyboard board canvas and it look like this.

Later on in the workshop, you learn how to use the third button on the auto layout bar.

Use it to design the storyboard scene to look like Figure A below. In the File Inspector panel, make sure the “Use Auto Layout” and “Use Size Classes” checkboxes are ticked-see Figure B.

Previewing The iPhone Devices In The Assistant Editor

Configure the Assistant editor window to preview the Main.storyboard in the iPhone devices-see the image below.

Use pinch gesture on your track pad to zoom content in the Interface Builder window or the Assistant editor widow. Also, use the preview orientation button on a device preview to flip it to landscape orientation and vice versa. The button look like this:

Task 1: Change the size classes tool to the iPhone layout

Use the size classes tool to change the size class tool’s grid to wCompact wAny. Notice how the storyboard canvas change to resemble the iPhone device in portrait orientation.

Click the View Controller object, then click the auto layout bar’s Issues button. Select “Add Missing Constraints” from the pop up menu. Take a look at the portrait orientation of the devices previews, in the Assistant editor window. No layout issues there. Rotate the devices previews to landscape orientation layout. No issues in the iPhone 3.5″ preview, the iPhone 4″ preview, and the iPhone 4.7″ preview; however, there are issues in the iPhone 5.5″ landscape preview and it look like this: 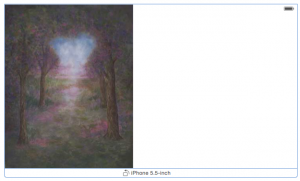 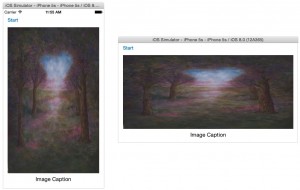 Click each view on the storyboard scene and you will see a solid orange box around each one. They indicate that the views has no constraints.

Click the Image View and Interface Builder display a large dotted red box on the left size of the canvas-see image below. It shows where the Image View will show up at run time. 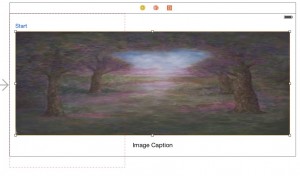 Before continuing, you should run the app in the iPhone 5s simulator to see what the user interface look like. The app’s user interface should still look fine in portrait and landscape orientation.

So, the orange boxes and the dotted red boxes indicate layout constraints issues. To fix them you will have to do the following.

Click the View Controller object either in the Interface Builder or the Document Outline. Next, select the Issues button from the auto layout bar. From the pop up menu, select “Add Missing Constraints”. Interface Builder adds constraints to all of the storyboard’s views and they appear as vertical and horizontal blue lines on the storyboard canvas. Also, the landscape preview of the iPhone 5.5″ device, in the Assistant editor no longer shows layout issues.

So far you’ve added and fix constraints for these size classes; resulting in the application’s user interface displaying correctly on any iPhone device and in any orientation. 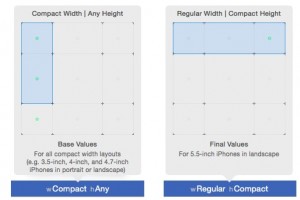 What you have to do now is add constraints to the iPad Size classes so the application’s user interface display correctly in the iPad simulators. As of now, the Assistant editor preview of the iPad device in portrait and landscape orientation look like images shown below. The app’s user interface will look the same in the iPad Simulators as well. 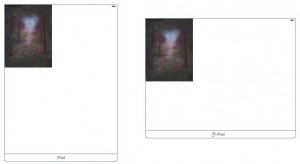 Now, adjust the Image View so it stretch all the way to the right side of the View. Also, move the label view so that it is centered below the Image View. You are ready to add constraints to the iPad layout.

Start by clicking the View Controller object. Next, click the auto layout bar’s Issues button. From the pop up menu, select “Add Missing Constraints”. Voila! Layout issues disappear from the storyboard and the Assistant editor preview of the iPad device, both in portrait and landscape orientation. The application’s user interface display correctly in the iPads and the iPhones simulators as well.

This is the end of Workshop 28 and in it, you learned how to: