Workshop 8: Run The App in The iOS Simulator 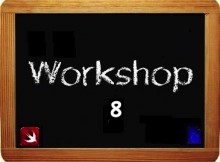 To test the Swift Variable application in in the iSO Simulator, you have to select an iPhone or iPad simulator from the active scheme menu, then click the Run (aka Play) button.

As you can see in Figure 1 above, the Text View doesn’t appear on the simulator’s screen. What give? Here’s the reason for this problem:

The Text View control is missing a layout constraint that’ll make it appear on screen.

Now to fix the layout constraint problem, you’ll have to do the following.

1. Click the Stop button on Xcode’s Toolbar’s. This will terminate the app in the iOS Simulator.

2. Click the Main.storyboard file. Hold down the control key and click-drag the Text View right-see Figure 2A below. Release your mouse when the entire view is highlighted in blue.

3. From the pop-up menu shown in Figure 2B, select Trailing Space to Container Margin. Xcode will add a constraint for the Text View and it will appear as a vertical line on the right side of the storyboard canvas. The blue arrow in Figure 2C shows where it is. 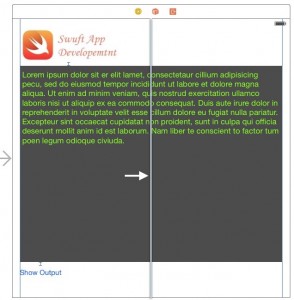 Before you go, here are some handy, dandy Xcode and iOS Simulator keyboard shortcut keys, which you will be using a lot.