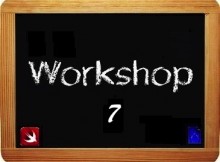 In the previous lesson you learned how to resolve auto layout issues for the application’s user interface. Now, you have to connect objects placed on the Main.storyboad scene’s canvas to code you’ll add in the ViewController.swift class file. I call this process connecting the view’s objects in IB and it is done in two steps.

You could perform above tasks your self or let the Assistant editor do them for you.

Here are the Assistant Editor steps for connecting the view’s objects (Text View and Button) in Interface Builder-IB for short.

2. In the ViewController.swift file that’s shown in the Assistant editor window, add a few spaces between code line 11 and 13. Your screen should look like Figure 2 below.

If line numbers doesn’t appear in the Assistant editor’s gutter-see Figure 2 above. You have to access Xcode Preferences window (⌘ + ,) and tick the Line numbers checkbox in the Text Editing tab-see image below. 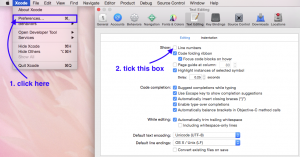 4. In the pop-up shown on your screen, enter outputTextView in the Name box, and click  the Connect button.

6. In the pop-up shown on your screen, select Action from the Connection menu. Enter actionShowOutput in the Name box, and click the Connect button.

Now, if you were to discount the ivar and the function from corresponding objects in IB; you wouldn’t be able to access the Text View and the Button objects in the ViewController.swift class file. By the way, an instance variable is also called an IBOutlet property variable. An IB button’s function is also called an IBAction function.