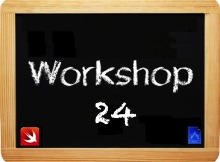 A function is a piece of Swift code that can be executed once or many times by an iOS application. In this workshop you learn how to define and use our own functions and how to use them to help write iOS applications.

This section of the workshop discuss how functions work and you learn how to define and use simple functions.

For example, suppose that we need to calculate the sales tax on the amount of the purchase in an iOS application. Diagram 2 shows a function called calculateSalesTax() that could perform this task.

A void function is one that require no parameters and return no value. The syntax of this type of function look like this:

Here is an example of how to create a void function. Add it before the closing } in the Swift Variable project’s ViewController.swift class file.

To use the sayHello function, you have to call or invoke it in the “Show Output” button’s IBAction method like this:

When you run the Swift Variable application in the iOS Simulator and click the Show Output button; you will see this output in the Text View control. 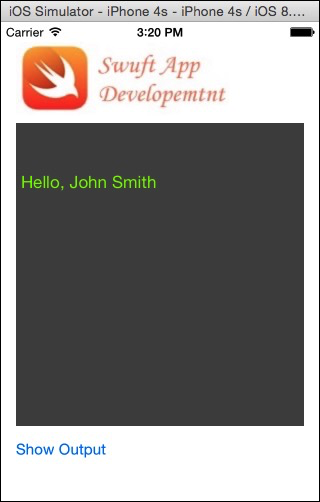 A Function With Parameters and No Return Value

There’s another kind of function you can create in a Swift class file. It takes one or more arguments and return no value. The values that a function receives from the calling function are stored in the function’s arguments, which are variables enclosed in parenthesis (). The syntax of this kind of function is as follows.

Each data item we pass to a function requires its own argument.

Say we wanted the Swift variable application to display these characters in the Text View control.

We can easily solve this problem using nested for loops. However, instead we will use a function to solve the problem. The app must display five lines. Each line has one more character than the preceding line. We shall us one function, printChar(), to produce each of these lines. Thus, we need to pass information to the function, namely the character (x) we want the app to display and the number of times (5) to display it.

The function printChar() need to know the character to display and the number of times to display it. Therefore, the actionShowOutput() must pass two values to printChar()-one of type Character and one of type Int. When the printChar() function is called, its caller initializes its arguments by passing a Character value to the first argument and an Int value to the second argument. The passed values, therefore, must be of the same type as the printChar() function’s arguments.

Here is the pseudocode solution for our problem.

Here is the Swift code representation of the pseudocode shown earlier for the actionShowOutput() function and the printChar() function.

After entering above code in the ViewController.swift file; run the application and click the Show Output button to see this output in the Text View.